Sure, we all want to shut off our brains every once in awhile with a couple of glasses of wine, a few extra hours of sleep, or some mindless TV watching. But certain lifestyle choices can threaten the health of our brains significantly, even when the connection isn’t obvious.

Habits that deny our brains important nutrients or rapidly kill brain cells put us at risk of mental disorders like depression or anxiety, as well physical ailments like Alzheimer’s, stroke, epilepsy, and even cancer.

It’s easy to forget that even if your mind is at rest, your physical brain could still be suffering. And while mental disorders are largely a result of genetics, diet and lifestyle play a huge part in how regulated and calm your brain activity can be.

Following are 7 dangerous habits that damage your brain – stopping them immediately, in conjunction with your doctor’s advice, can make a world of difference in your mental and physical health. 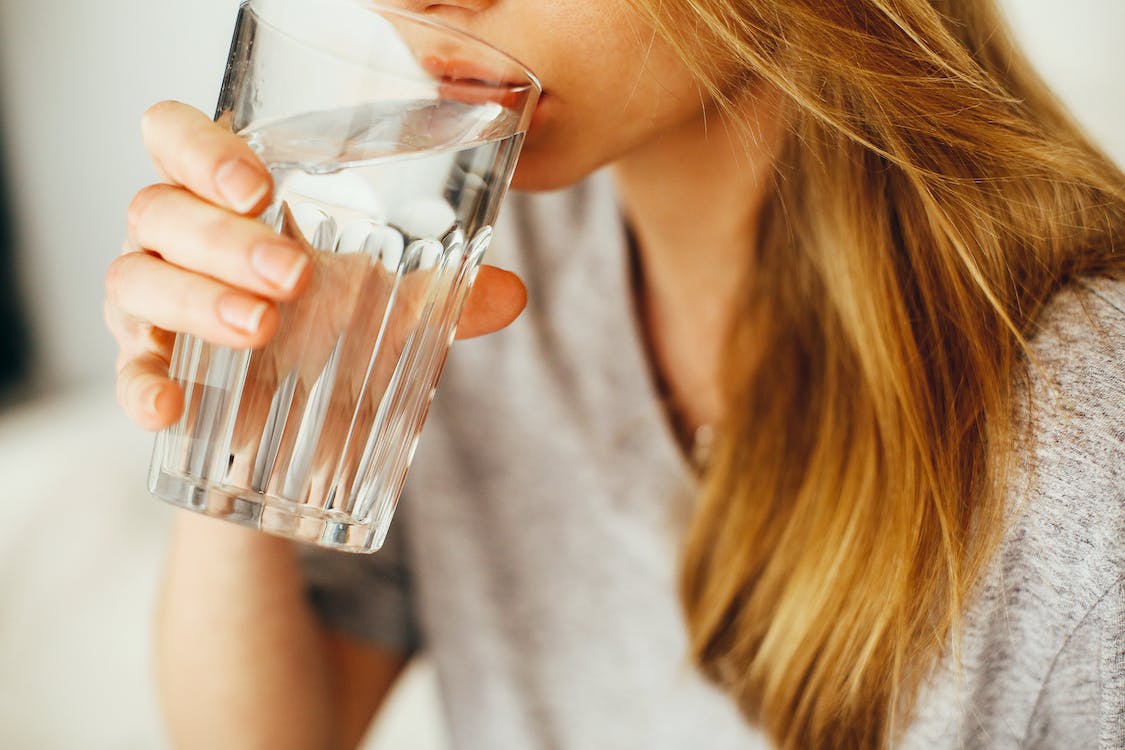 Prevention, therefore, is a big deal. We need to do everything we can to reduce our risk of developing cancer, even as we understand that sometimes it just happens.

Cancer is one of the scariest diseases out there because as far as we have come in treating it, the cancer still wins a lot of the time. And the treatment itself is absolutely brutal, leaving behind painful side effects even if the disease is wiped out.

You probably know about the importance of healthy food when it comes to cancer prevention. But what is less talked about is the role that beverages can play.

Certain drinks can up your risk as well and are better off avoided. You will be surprised by some of these!

Your liver is your largest internal organ. Odds are you don’t think about it often, but your liver is working for you every single moment of your life. Don’t let your liver down – instead, discover some simple drinks to keep your liver happy.

A fatty liver or cirrhosis can make you tired, overweight, and in some cases, turns your skin and eyes yellow. A diseased liver can kill you slowly and unpleasantly.

In fact, chronic liver disease kills about 31,000 people a year in the states and most of those deaths are avoidable.

What can you do to keep your liver functioning at peak efficiency? Try some of these all-natural drinks and your liver will thank you!

Chief of Army Staff, Lt. Gen. Tukur Buratai, has revealed how his deputy, Lt. Gen. Lamidi Adeosun, Army Chief of Policy and Plans (Army), saved his life during an ambush.

He recalled that the ambush occurred in 2015 in the North-East.

The Army head spoke in Kuta, Osun State, during the inauguration of a bridge named after him.

It was constructed by the Nigeria Army Engineering Construct Regiment, Ede.

He noted that on his appointment as the Chief of Army Staff, he met Adeosun, an indigene of Asamu in Osun, rejigging the military arm.

“When I had the first ambush, he was with me in the vehicle. It was on September 18, 2015 and I can see the courage he exhibited. He was able to mobilize the troops to counter the bandits, the terrorists out of the way. So his elevation is not new to me. He deserves it.”

Buratai hailed the Olowu of Kuta, Oba Adekunle Oyelude, for his support for the Nigerian Army.

The COAS added that the army was determined to be responsive and professional in the discharge of its constitutional duties.

Burna Boy is a man of many talents and a lot of fans don’t know that if he wasn’t doing music, he would have been a boxer.

Israel Adesanya during the call said; “my manager was telling me if you weren’t doing music you would’ve fought” and Burna Boy responded with “yea, most definitely” and when asked if he had ever boxed before, he said “yea, I used to do boxing” while Israel Adesanya revealed he used to dance but the problem was that he couldn’t sing.

It was a beautiful chat between two friends who are doing their bits in different ways to bring respect to the continent of Africa.

OAP and leader of the Free the Sheeple Movement, Daddy Freeze, has asked Nigerian Christians to beg their pastors not to stop cursing him as their curses are actually blessings in his life.

Freeze stated this on his IG page while reacting to claims that he has stopped attacking pastors because he is afraid of the curses they lay on him.

Recall that after the verbal assault he received from Port Harcourt-based clergyman, David Ibiyeomie over his comments on David Oyedepo, Freeze released a video where he apologized for calling Oyedepo a bald-headed fowl”.

Some Christians came online to imply that he apologized and has stopped attacking pastors because he is afraid of the curses they would lay on him. Taking to his IG page to respond, Freeze said the curses placed by the aggrieved pastors are blessings to him.

Read what he wrote below

”I don’t fear curses, as a matter of fact, I love them dearly. They are a clear attestation that my purpose is being fulfilled and an indication that more blessings would come my way.

So please I beg you, and please beg your pastors as well, not to stop cursing me.

Bless me with your curses.-Unless of course my message is not a true revelation from Christ that aligns with the scriptures. As long as it is, your curses only bless me as the scriptures say.” 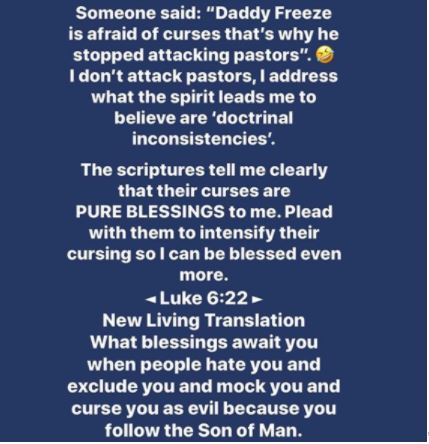 He was comforted by the consolation of the Premier League title but you could see how desperate the Egyptian was to score in the final few matches of the campaign.

In the end, he finished four goals behind Jamie Vardy after the Liverpool star notched 19 goals.

But it seems he’s desperate to win that Golden Boot back during the 2020/21 campaign.

In Liverpool’s opening match against Leeds, Salah grabbed a hat-trick and is already leading the way in the goalscoring charts. He’s now scored 97 goals in 154 appearances since joining the club.

“I think Salah will end up going above Mane, not because Mane’s not a great player, he is a great player as Rooney was, but the reason players [like Salah or Ronaldo] are different is that they have something up here which means that they go home at night and being the best player in the world rocks their world, whereas a Rooney or a Mane, they feel that the team’s got to win, I’ve got to give my all, I’ll fight for my team-mates. Salah doesn’t do that.”

“[Kylian] Mbappe, he’s fantastic. Neymar, he’s a bit up and down a bit… Where is the best player in the world going to be in the next couple of years?” Neville asked.

“Salah is not far away from it anyway, but to me on Saturday he looked like an absolutely different level.”

Chelsea’s Olivier Giroud is expected to be on Juventus’ radar if they fail to sign striker targets Edin Dzeko and Luis Suarez.

The Serie A champions have made Dzeko their No 1 target this season after a personal request from new boss Andrea Pirlo but Roma will not let their captain go without a replacement.

The former Manchester City player, however, may be set to leave the Italian capital as Roma are close to agreeing a deal to sign Napoli striker Arkadiusz Milik on a loan deal with obligation to buy for an overall fee of almost £23m.

However, neither Milik or Dzeko have yet agreed to the switch and Sky in Italy are suggesting there could be a domino effect should the Poland international join Roma, as it would leave the door open for Dzeko to join Juventus.

Juventus are also keeping tabs with Luis Suarez, who is in the process of terminating his contract with Barcelona and will sit an Italian citizenship test this week to obtain an EU passport which would facilitate his move to Turin.

The Juve board are monitoring the situation with Suarez but first need to understand the timeframe in which he will be able to complete the paperwork ahead of a possible move.

According to Sky in Italy, Giroud would represent a more immediate option to both Suarez and Dzeko and Juventus will firm up their interest with an offer should it take too long to pursue them.

Sam Hart, the Director-General of Abia State Quality Management Agency announced this on Twitter on Thursday.

In the Twitter thread, @truthfully83 made a series of allegations against the Chinese firm which include physical assault of workers, sexual harassment, terrible working conditions, discrimination and others.

Sam Hart in the tweet said the governor of the state, Okezie Ikpeazu has “directed an investigation into the situation at Inner Galaxy Steel Company, Ukwa, Abia State. A number of Government officials were at the premises this morning including the Member Representing the LGA at the HoA.

Ganduje had in July summoned 350 Islamic clerics to the Government House to hold a special prayer session against the coronavirus disease (COVID-19).

The clerics were to be paid an allowance of N50,000 each, but Fagge allegedly pocketed a large share of the allowances of the 10 clerics he was charged with paying.

“Seven out of those 10 people had their allowances given to them by the government retrieved and it was so disheartening,” Magaji.

The anti-graft commission boss said the sum of N310,000 has been retrieved from Fagge and returned to the clerics.

He said the KPCACC is still investigating if there are similar complaints with other clerics who were paid the allowance for the special prayer session.

Magaji said the issue has taken a political dimension because the agency has not investigated someone very close to the government before.